Wee Blind Mice: The Things They Didn't Tell Us In Church! 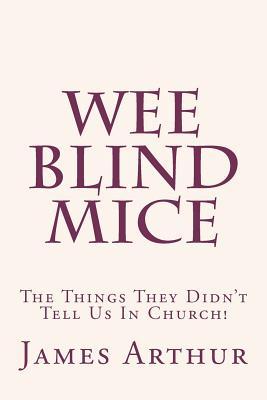 Wee Blind Mice reveals the blatant inconsistencies that abound in modern KJV based translations of the Bible. Most believers are unaware that Catholic-trained translators were responsible for our present-day versions of the scriptures and that they used "poetic license," literally adding to and deleting words and sometimes complete phrases that they considered "problematic" (inconsistent with Catholic dogma) from the original Texts. The "version" that resulted from their tinkering has had the effect of misleading millions of people to unwittingly follow the Anti-Christ and voluntarily take the Mark of the Beast in their foreheads and upon their hands. The Author takes readers through a step-by-step, point-by-point tour of the Holy Scriptures, juxtaposing the KJV errors with the correct meaning intended by the Prophet's writings. Many popular misconceptions are explained with scriptural evidence to support the conclusions presented. The scriptural interpretations presented herein are not merely the Author's own opinions but rather represent countless hours of critical research by Hebrew scholars at The House of Yahweh and brought forth by Yahweh's last days witness, Yisrayl Hawkins. It is no wonder, the Author surmises, that our world is experiencing the catastrophic problems of wars, financial collapse, sickness and diseases, weather anomalies, earthquakes and social unrest. There is a simple explanation for our accumulated miseries and there is an equally simple remedy for eliminating them. After reading Wee Blind Mice and removing the blinders, the solution will be obvious. Readers will be astounded to see how Centuries of religious malfeasance has allowed misinformed teachers to deceive so many people so effectively and brought us to our present conundrum. Ironically it was all foretold in the very book most believers attest to follow but have never understood. There are currently over two-billion permanent job openings available for both men and women in Yahweh's everlasting government. To qualify for one of these jobs, extensive training is required. This training is available only at Yahweh's House. There are no churches or other religious venues that can correctly teach you this information. They simply do not know it. Unlike expensive schools of higher learning in this world, the training you receive at Yahweh's House costs you nothing in terms of money. When your training is completed you will not be burdened with a huge debt as with colleges and universities. You will however be qualified and fully prepared for an eternal life of service to your fellow man as well as all of Yahweh's endless creation. Wee Blind Mice is available in Paperback, and in Kindle format for a considerably lower cost. Don't pass up this opportunity to remove the deceptions you have been taught and learn the truth that "they didn't teach you in church!"