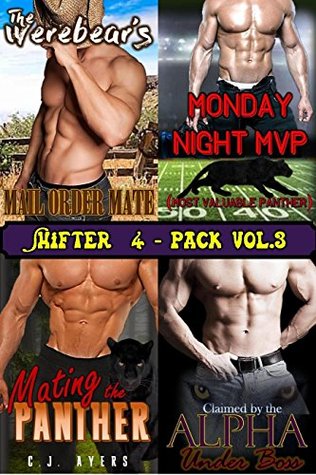 4 SHIFTER ROMANCE BOOKS UNDER ONE COVER!

THE WEREBEARS MAIL ORDER MATE
Wealthy rancher Tanner neither wants nor needs a wife. The sexy bear shifter can have a woman any night of the week. Women flock to him. But, his adopted daughter Chloe, foreman Josiah, and ranch hands are all the family he needs.
Through a cruel twist of fate, curvy Heather is alone and penniless. While sorting through her life, she applies to a mail order bride agency. To her surprise, she receives a touching letter. Still, marrying a man she’s never met is crazy. Then again, maybe it’s the fresh start she needs.
Chloe loves her dad and their life, but she needs a mom. Her dad doesn’t get it. Being the only girl on a ranch is tough. She knows that if it’s gonna happen, she’ll have to make it happen. With her dad’s credit card, the 10 yr.old finds them perfect wife and mother.
She just prays that the letter she wrote the pretty lady in her dad’s name will persuade her to give them a chance…. and that her dad doesn’t ground her for life when he finds out!

MONDAY NIGHT MVP
Kristin and Derrick were childhood sweethearts- first loves, until their parents had a vicious falling out over some mysterious offense. Next thing they knew, their parents separated them, moved to opposite coasts, and forbade them from having contact.

Derrick, a cunning and focused panther shifter, is now a football MVP with a body to kill for, and Kristin is a bold and curvy sports doctor.
When Kristin accepts her dream job with the Washington Redskins, she is shocked to the core to find that the sexiest, most eligible bachelor in sports, Derrick, has just been traded by New York to…. the Redskins. What’s more, he has never forgotten her either.

When Derrick threatens to break Randy Wolfe's record for rushing yards, he finds the woman who holds his heart seriously imperiled.

Will Derrick risk his entire career to keep Kristin as his own?
Can their parents put aside their differences to save their children?

MATING THE PANTHER
Caleb is the CEO of PanCorp, a fortune 500 company, the Alpha of the most powerful panther shifter pack in the U.S, and Chicago’s most eligible bachelor. He is inundated with women everywhere he goes, yet none have what he’s looking for. Until… a twist of fate lands him in the arms of Felicia.

When Caleb falls victim to foul play, he is left injured on the the road. What’s worse, he’s in his panther state.
Fortunately, a local zoo comes to his aid.
Unfortunately, while sedated, he can’t shift back to a man.

Of course, when his injuries heal and he’s no longer sedated…

Felicia, a big cat handler at the city zoo is used to dealing with high-stakes situations. What she isn’t expecting to find one evening is a full-grown man standing naked in the middle of the cat enclosure.

Can this darkly seductive man really be Shadow, the injured panther brought in as a rescue months before?

CLAIMED BY THE ALPHA UNDERBOSS
Emily always did find the bad boys. When her boyfriend double crossed the mob and embezzled millions of dollars, he left her holding the bag. Emily finds herself in a warehouse, bound and being questioned roughly by thugs.

Markus is second in command of the local mafia, a wolf shifter, and an undercover FBI agent. He’s spent years earning the trust of the organization and is inches from shutting down the operation. He just needs to get the girlfriend to talk and find the money.