Voyage to Auschwitz: The demon of Certainty 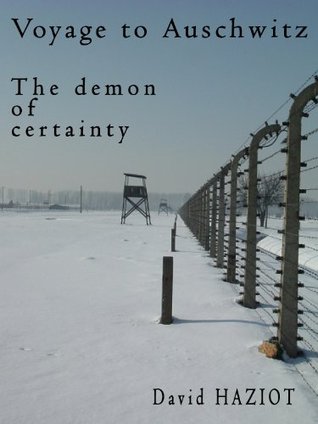 The author, who is not a Holocaust specialist but has always been very interested in the subject, is invited by a friend, a history teacher, to accompany a group of teenagers on a school trip to Auschwitz. To be able to see this place the way it is or the way it was, under the hardened snow in temperatures far below freezing (7°F) would be quite testing and a unique experience. As a museum of deportation and extermination, Auschwitz has held onto all of its macabre power. Everything is still there, the railroad tracks, the buildings, the barbed wire, and the crematories, torn down and in ruins. One cannot escape the terrible living presence of the greatest mass crime in all of history. It haunts you, and you are immediately seized by questions: How? Why did this happen?

This essay begins much like a journalist’s assignment. It then develops into a clear and precise historical recap of the conditions and process of extermination, doing away with a number of misconceptions still held to this day. The text goes on to broach an original philosophical reflection upon the intellectual roots of European thinking. It shows how, with an obsessive search for certainty, this thinking was to be one of the keys to understanding this unspeakable crime. Digging deep into the history of the budding sciences and mathematics, the author explains to us how the concept of certainty, now scientifically demolished, which seemed so inoffensive with regard to physics or chemistry, took on a demonic and destructive power when it was used in anthropology and purported to govern the behavior of man.

A detailed chronology then situates Auschwitz in the historical context of World War II, and brings to light the two very distinct phases: first a classical war that lasted about two years, followed by the veritable frenetic craze for murder that overtook the Nazis as soon as they invaded the USSR in June of 1941.

David Haziot is a French author: biographer, novelist, essayist, and scriptwriter. He has published a number of books that have garnered him awards from the most prestigious juries in France, notably: Le Vin de la Liberté (a novel), which won the Prix de l’Académie du Vin de Bordeaux (the award from the Bordeaux Wine Academy) in 2000, as well as the Prix du Roman Historique (the award for best Historical Novel) in 2001; Van Gogh (a biography), which won the Prix de l’Académie Française in 2008; Le Roman des Rouart (biography of an entire family very involved in the Impressionist movement), which won the prestigious Prix Goncourt for biographies in 2012.