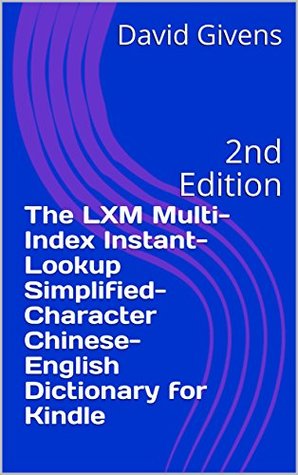 SECOND EDITION
KEY FEATURES
• Instant Lookup: Simply highlight the characters to get the pronunciation and definitions. No need to figure out radicals and count strokes.
LXM will automatically be installed into the native Kindle Dictionaries library and will thus be set up to automatically look up highlighted characters in a Chinese text.
• More than 115,000 entries
• English definitions
• Hanyu pinyin pronunciation for each entry
• Both traditional and simplified characters for each entry
• NEW: Multiple indexes for manual lookup:
• Radical-Stroke Index
• Radical-Stroke Index(with Radical Variants)
• Pinyin Index
• Stroke Count-Stroke Order Index
• Links to words and phrases beginning with a character
• NEW Reverse Dictionary (逆引詞典) Lookup: Links to words and phrases ending with a character
• Based on the CC-CEDICT Chinese-English database
• Links to on-line example sentences (jukuu.com)
• Separate versions available for instant lookup of traditional or simplified characters

Chinese language books are increasingly available on Amazon.com and of course on www.amazon.cn/ (亚马逊中国-Amazon China). Although Amazon provides free Chinese-Chinese and Chinese-English dictionaries, they are of limited use for learners of Chinese because the all-Chinese dictionary gives definitions only in Chinese and the Amazon Chinese-English dictionary includes little, if any, hanyu pinyin pronunciation information. The Amazon dictionaries are for simplified characters only, thus making reading texts in traditional characters difficult on Kindle.

The LXM Chinese-English Instant-Lookup Dictionary for Kindle is designed to make it quicker and easier to read Chinese texts on the Kindle Paperwhite/Voyager ebook readers by providing for instant lookup of either traditional or simplified characters with English definitions and hanyu pinyin for all entries.

After setting the LXM Dictionary as the default dictionary for Chinese, look up a word while reading a Chinese ebook by simply highlighting the characters, and the dictionary entry will pop up. Entries include the traditional or simplified headword characters, the simplified- or traditional-character equivalent, the pronunciation in hanyu pinyin, and glosses of the headword in English plus links to words and phrases beginning or ending with a given character. Entries can be highlighted and saved for review or use in the Kindle Vocabulary Builder.

Saved entries can in turn be imported into programs such as the Kindle Mate Kindle Clippings and Vocabulary Builder Manager (see http://kmate.me), which provides tools to export to the file format used in the Anki flash-card system. Separate volumes are published for lookup of text in traditional and simplified characters. The LXM Dictionary also supports the native Kindle lookup by hanyu pinyin (be sure to set the keyboard to Chinese input).