God Bless America?: His Rescue Plan & How We Can Be "ruler Over All That He Has" 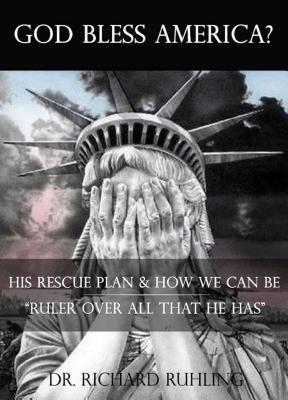 God Bless America? offers a fresh meaning to the Great Sign that was in the sky on September 23, 2017 (YouTube) because of the 9-month pregnancy image pointing to next spring.

The sign, according to astronomers, is a complex convergence of aligning planets and constel-lations that unfolds over 9 months that fits Revelation 12:1,2. Starting September 23, 2017, the sun will be in the virgin, Virgo, and the moon will be at her feet. She will have a crown of nine stars and three planets in alignment making 12. Jupiter, symbol of deity, will be in the womb area, exiting at her feet. What does it mean?

Since God guides the stars, it's not the birth of Christ or He would be 2000 years late.

God is on time, and He's the Author of nature and the Bible, so we look to the Bible to explain what nature doesn't?

God called Israel His "first-born" in Exodus 4:22, but this implies another event. Paul supports this when he included the Exodus and said, "All those things happened to them for examples ...ends of the world." 1Cor 10:1,11. The Exodus then, is an example of an event that's impending, signaled by the imagery of Revelation 12:1,2. It's also the imagery of 'travail on a woman with child' when the 'day of the Lord' (end-times) comes with sudden destruction in 1Thessalonians 5:1-3.

America has many parallels to Egypt as the greatest nation then and now.

1. They killed babies; the US has aborted 60 million.

2. Egypt was a source of food in times of famine as America is for some nations now.

3. Israel went to Egypt in a famine. Pioneers came when the Bread of Life was banned by the papacy in medieval times. Pioneers risked their lives for relief.

4. Egypt enslaved Israel, but the US has enslaved most of its people with alcohol, tobacco, drugs and bondage to food, gambling, greed, crime, sex, perversion, music, TV, etc.

God is going to execute judgment on the US as He did on Egypt. Israel made a covenant at Sinai and they became God's kingdom and Bride, Exod 19:5,6; Jer 3:14. This brings us to a more biblical understanding of the wedding parables, not a rapture. Readiness for the calamity in those parables is the key to high destiny. The Rule of 1st Use helps us understand them. For example...

The cry at midnight in Matthew 25:6 is first found in Exod 12:29,30 as calamity fell on Egypt. The 'knock' in Luke 12:36 is an earthquake because Laodicea (where He knocked) ended that way. "The day of the Lord' begins with an earthquake in Joel 2:10,11; Paul says 'sudden destruction.'

God Bless America? shows how we can be ready for that event by 'watching' on the eve of Passover (all the wedding parables have Passover imagery) and it's the authentic night for communion and the key to high destiny, Luke 12:35-37,44.

But the wedding parables have been misunderstood as a pre-tribulation rapture. For the student of eschatology and end-times, here's a book that helps explain Bible prophecy and the impending apocalypse.

Readiness for a sudden event (cited by Christ in 7 parables, Matthew 24:31- 25:13) and explained in the book so should be important to us because it affects destiny, I urge readers to get a copy of God Bless America? It's about His Rescue Plan & How We Can Be "Ruler Over All That He Has."

Think about it...it's so important to Christ that He is offering to make us "ruler over all that He has" if we answer His end-time call...It's more important to Him than we realize...